Alpha GPC (α-Glycerophosphocholine) is a popular nootropic supplement that can improve memory and learning, boost mood and energy, and prevent cognitive decline.

Alpha GPC is a choline source synthesized from sunflower or soy.

Choline is an essential nutrient that can also be found in food, particularly eggs. It’s required for many basic processes inside cells, and it is critical for proper brain development.

Alpha GPC is a common part of nootropic stacks and is often paired with racetams (oxiracetam, aniracetam, etc..).

This is because racetams can deplete choline stores. Stacking with a choline source like Alpha GPC can prevent this from happening and synergize the nootropic effects of both substances.

What Are Some Alpha-GPC Benefits?

Alpha GPC is used for many different purposes. It is clinically proven to treat some brain injuries, but it may also have nootropic benefits for otherwise healthy people.

There is evidence that Alpha GPC has neuroprotective benefits.

In one small trial of adults suffering from cognitive decline, Alpha GPC “had a significant positive effect on patients’ condition including cognitive function.” Researchers noted an improvement in as little as 5-6 days.7Pizova NV. The use of cereton in patients with chronic brain ischemia and moderate cognitive impairment, Zh Nevrol Psikhiatr Im S S Korsakova. 2014

Experimental and clinical studies have documented that Alpha GPC is able to counter the amnesia induced by scopolamine. Scopolamine is an anticholinergic, meaning it stops the flow of ACh in the brain. This action causes memory loss.

Alpha GPC can counter this effect when it is administered, indicating how it can act as a neuroprotectant by its action on ACh.9Schettini G, et al. Molecular mechanisms mediating the effects of L-alpha-glycerylphosphorylcholine, a new cognition-enhancing drug, on behavioral and biochemical parameters in young and aged rats, Pharmacol Biochem Behav. 1992

It seems that Alpha GPC can even potentially treat traumatic brain injuries.

One study looked at patients who had received serious concussions.

One study looked at the combination of Alpha GPC and piracetam (a common nootropic stack) on patients with Parkinson’s.

Alpha GPC seems to be a promising treatment for Alzheimer’s.

There are multiple human studies that implicate choline and acetylcholine dysfunction in this disease.

Is Alpha GPC A Growth Hormone?

Alpha GPC is not only useful for preventing cognitive decline or warding off diseases like Alzheimer’s and Parkinson’s.

The same mechanism that makes Alpha GPC useful as a neuroprotectant that fights Alzheimer’s and Parkinson’s can also improve memory in healthy people.

In one study, young volunteers were given either Alpha GPC or a placebo. Then researchers induced temporary amnesia by injecting them with scopolamine, an acetylcholine inhibitor. The volunteers that had taken the Alpha GPC scored significantly better on memory tasks than the control group.19Canal N, et al. Effect of L-alpha-glyceryl-phosphorylcholine on amnesia caused by scopolamine, Int J Clin Pharmacol Ther Toxicol. 1991

This result is not surprising, considering how important acetylcholine is for memory encoding.

There are also plenty of anecdotal reports of Alpha GPC improving recall. Some users report that this benefit starts kicking in after only a couple of weeks of supplementation.

While Alpha GPC has a reputation as a powerful nootropic supplement, it can also improve athletic performance and aid in recovery and muscle building after exercise.20Tim Ziegenfuss, Jamie Landis, Jennifer Hofheins. Acute supplementation with alpha-glycerylphosphorylcholine augments growth hormone response to, and peak force production during, resistance exercise, Journal of the International Society of Sports Nutrition. 2008

One study also noted an increase in “psychomotor vigilance,” meaning mind-body coordination. Interestingly, these studies only saw an improvement in lower body force, not in the upper body.

Still, both concluded that this supplement could be useful for strength and power athletes.21Bellar D, LeBlanc NR, Campbell B. The effect of 6 days of alpha glycerylphosphorylcholine on isometric strength, J Int Soc Sports Nutr. 2015 22Marcus L, et al. Evaluation of the effects of two doses of alpha glycerylphosphorylcholine on physical and psychomotor performance, J Int Soc Sports Nutr. 2017

As we mentioned, one of Alpha GPC’s major benefits include stimulating the production of growth hormone, which is vital for building new muscle.

For these reasons, many bodybuilders have added this supplement to their routine. If you live an active lifestyle, Alpha GPC could pull double duty for both mental and physical enhancement.

Alpha GPC could be a very useful study aid for many people due to its wide range of cognitive enhancements. One of the most classic and reliable nootropic stacks is Alpha GPC with a racetam (such as aniracetam or oxiracetam)

This combo is great for focus, attention, memory, and overall mental performance. We highly recommend looking into this stack if you are a student.

Does Alpha GPC Help With Depression?

So far there have not been any studies looking at this specifically.

Generally, depression is thought to affect neurotransmitters like dopamine and serotonin.

There is some preliminary evidence that Alpha GPC can increase dopamine levels, but this mechanism is not well understood.24Trabucchi M, Govoni S, Battaini F. Changes in the interaction between CNS cholinergic and dopaminergic neurons induced by L-alpha-glycerylphosphorylcholine, a cholinomimetic drug, Farmaco Sci. 1986

Some users report that Alpha GPC can increase mood.

It may be the case that by improving brain function holistically, this nootropic could have a use for treating depression.

Since it affects ACh levels, Alpha GPC has a general effect on most mental processes.

However, more research is needed before we can draw any firm conclusions.

Is Alpha GPC Useful For ADHD?

There is no evidence that Alpha GPC can treat ADHD specifically. However, it does have cognitive benefits for memory that might have a secondary benefit for people with this condition.

It may be useful when stacked with other nootropics that are known to improve ADHD symptoms, such as NALT or l-tyrosine.

How Alpha-GPC Works In The Brain

Alpha GPC is a highly bioavailable form of choline. Research shows that when it is ingested, it is quickly broken down into choline by the gut.25Traini E, Bramanti V, Amenta F. Choline alphoscerate (alpha-glyceryl-phosphoryl-choline) an old choline- containing phospholipid with a still interesting profile as cognition enhancing agent, Curr Alzheimer Res. 2013

Once Alpha GPC crosses the blood-brain barrier, it affects cognition through a few different pathways.

ACh is one of the most pervasive chemical messengers in your brain. By increasing levels of ACh, you can increase the overall transmission of information throughout your brain. This affects most cognitive functions, from memory to mood, to decision making, to executive processing.

Alpha GPC is also a precursor to a compound called Phosphatidylcholine (PC).

This is a phospholipid that makes up a significant proportion of your brain cells. PC is vital for maintaining and growing neurons.

If your PC levels are too low, this can eventually lead to cognitive problems such as dementia or Alzheimer’s.

Alpha GPC and Your Nervous System

ACh isn’t just used by the brain, but by the whole nervous system which is why it may also help athletic performance.

How Much Alpha-GPC Should I Take?

The recommended dose for most people is 400 mg three times a day.

When To Take Alpha GPC

Alpha GPC can be taken any time, although for some people it can have a mild stimulatory effect so it might be best to avoid it before bedtime. Most people take it in divided doses 2-3 times a day.

Can You Take Alpha GPC Every Day?

Alpha GPC is safe and non-toxic, and most people tolerate it well. You can most likely take it every day, but as with all nootropic supplements, we recommend cycling it.

This means sticking to a schedule where you take it on weekdays and not on the weekends or take a whole week off every couple of months. It’s important to listen to your body and discontinue any supplement you think may be causing issues.

There are very few adverse reactions reported when taken 400mg 3x/day. Most clinical trials report that this nootropic has a very low side-effect profile.

However, some people report these Alpha-GPC Side effects:

These are relatively rare, but discontinue use if you think it is cause problems for you.

There are no known drug interactions.

Alpha gpc is underrated imo when ppl say its optional to dose it alongside racetams for headache prevention. On its own it can really improve my workouts and motivation outside the gym. Alpha gpc and uridine are my fav mood enhancers. Dont even need tianeptine wheb i consistently take the mrhappystackk​u/Robtobin1
I take 300 mg twice a day. Sometimes on weekends I forget to take it and my wife is convinced that it effects my mood. She says I seem happier when I take it.​u/Therealbigjon
The alpha gpc is absolutely awesome. I must have been deprived of choline because before I was groggy all day and had some low level of brain fog. I’ve just been taking the alpha gpc, l theanine, b complex, multi, and fish oil and I have been feeling absolutely great. My lifts at the gym have more energy, I can focus more easily, and I find I even have more motivation.​u/reaper59

I find Alpha GPC Choline to be absolutely amazing both my wife and myself use it daily. We started using it in small doses and the improvement in focus and memory is clear. We then up our doses to eight caps a day and well that did not disappoint it just improved even more. Volbriecht Ortrun Solvein
Previous to taking Alpha GPC, I was becoming very forgetful, and I felt that my strength was fading. After taking the supplement for several weeks, I noticed my cognitive function improving, and my strength improved as well. I am very pleased with this supplement.​Thomas Croyle
Foggy head & fatigue if I take a full dose in the morning, but clear and focused if I spread it out 1/2 morning 1/2 evening.. highly recommend – Good Stuff!​Skipppy

Buy Alpha-GPC From These Trusted Sources

Robert Slovak and Victor Sagalovsky from Litewater joined me to discuss all things water.  Litewater produces high-quality deuterium-depleted water while education on the importance of depleting deuterium from water.  This podcast is full of crucial tidbits on fueling your body with the highest quality water!

5:00 What is Deuterium-depleted water

19:00 What deuterium does to cells and mitochondria

24:00 Where deuterium is found in the body 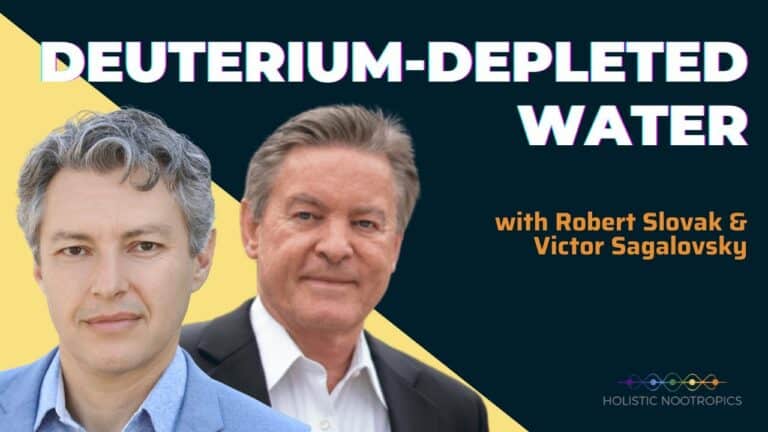